Over the course of the anniversary year 2016/2017 to date, the operating business has presented itself in even better shape: the volume of orders received rose noticeably in the first half of the year. Despite the market environment that remains challenging, the Group succeeded in maintaining sales at a roughly stable level and further increasing the operating result in the core business overall.

At the same time, Voith has consistently driven forward its strategic agenda. Already in the first year of its existence, the new Voith Digital Solutions Group Division has fully met the expectations placed in it. Voith is developing into a company that is playing a major role in the digital transformation of its industries. Aided by the successful sale of the KUKA shares, the Group’s financial situation has likewise clearly improved.

“In the first half of the year, Voith has once again succeeded in increasing its return on capital and its return on sales, while sales remained roughly at the same level. Additionally, we are making substantial progress in the gradual implementation of our digital agenda. Thanks to central strategic decisions made in past years, Voith has a profitable core business, a coherent strategy for the future and a strong balance sheet. Following the Company’s successful transformation it is now in a good position to achieve profitable growth on a sustainable basis,” explained Dr. Hubert Lienhard, President & CEO.

Developments in the core operating business as planned

In the first half of the 2016/17 fiscal year, the Voith Group’s core operating business continued to see positive developments. The volume of orders received by the three core businesses, Voith Hydro, Voith Paper and Voith Turbo, totaled €2.32 billion. This is an increase of eight percent on the previous-year period.

At the same time, Voith succeeded in further improving the profitability of the core business: the profit from operations of the three established Group Divisions increased to a total of €117 million (€110 million) with Voith Paper excelling with a growth of 54 percent. 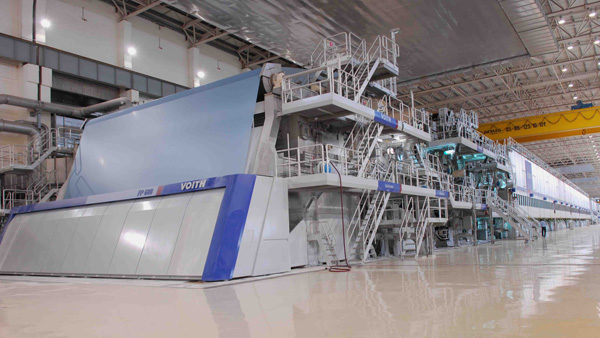 The Group’s financial situation has similarly significantly improved over the first half of the year. “We have considerable financial headroom at our disposal for organic growth or acquisitions that we are planning to consistently exploit over the coming years – not only in our established business but also in the area of digital services,” says Voith’s CEO Lienhard.

In the past months already, Voith has been driving forward its digital transformation and launched numerous projects and initiatives. The new Voith Digital Solutions Group Division, where Voith has bundled its entire expertise in the fields of automation, IT, software and sensor technology, is at the heart of the Group’s digital agenda. Voith Digital Solutions not only acts as a digital “enabler” for the established core activities but also develops new digital products and solutions.

Core operating business according to plan

The turnaround initiated at Voith Paper in the past fiscal year stabilized and accelerated further in the first half of the year. Thanks to several major orders, the volume of orders received was 74 percent up on the previous year value. Sales remained just about stable. On account of increases in productivity as a consequence of the successful restructuring measures in previous years, profit from operations rose significantly by 54 percent.

Outlook: Voith Group on track for the future

Voith retains its confidence with regard to the full fiscal year 2016/17. The Group will continue to invest in its digital transformation over the remaining course of the year. All in all, an additional €100 million has been earmarked for the development of new digital products and solutions over the coming two fiscal years. But the Group is also driving forward the growth of its core activities.

In the operating business, Voith continues to expect sales roughly matching the previous-year level and a slightly increasing volume of orders received in an ongoing challenging environment. The profit from operations will be clearly positive but is likely to fall below the level seen in the previous year as a result of the build-up costs for the Voith Digital Solutions Group Division in line with planning. The group net result will reach a record level in the anniversary year.

“The current fiscal year promises to be another good year for Voith. This means that Voith remains well on track for the future. We are consistently pursuing our goal of positioning Voith as a key digital industry player,” explains CEO Lienhard.